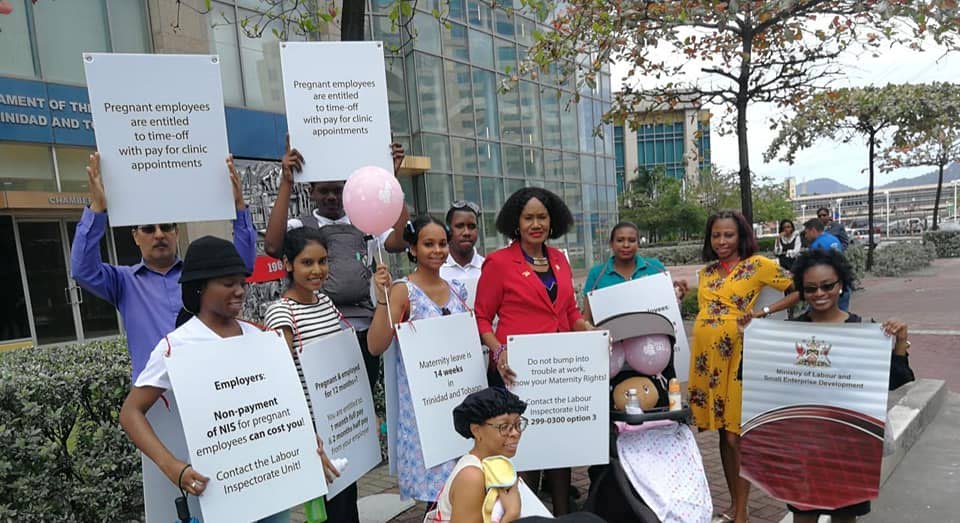 Do you know your maternity rights?

2 Hrs AgoMinister of Labour and Small Enterprise Development, Jennifer Baptiste-Primus, centre, is joined by staff for the ministry’s Maternity Matters at Work Road Show in Port of Spain in early March. –

Pregnancy can be a beautiful experience, but women may be concerned or uncertain about what benefits expectant working mothers are afforded under the Maternity Protection Act.

“It’s for all women in TT. Once you’re working, it doesn’t matter where you’re working. The Act covers you,” from the beginning to the end of pregnancy.

The Act allows for pregnant women to take time off from work in order to get prenatal care. “Once a working woman finds out she is pregnant, she must inform her employer in order to get permission to attend prenatal clinic, public or private,” Lewis-James explained.

“The Act says the employer needs to give her ‘reasonable’ time off with pay.” The definition of reasonable, she said, is relative depending on whether the expectant mother decides to attend the clinic at a public health facility or see a private doctor.

“Attending public pre-natal clinic takes a while, as opposed to making an appointment at a private doctor. But wherever she chooses to go, a pregnant woman cannot be denied getting that time off.”

Lewis-James said the expectant mother is entitled to 14 weeks maternity leave, providing she has worked with that employer for 12 consecutive months. The Act was last amended in 2012, increasing the number of weeks for maternity leave from 13 to 14. Her employer’s obligation is for one-month full pay and two months half pay. The National Insurance Board (NIB) pays a maternity benefit, which is half of the mother’s salary for two months. It also pays a maternity grant of $3,750 once the baby has been born alive.

“She has to write to her employer indicating when she would like to proceed on maternity leave and attach the original medical certificate from the doctor regarding her expected date of delivery.”

This letter must be submitted to her employer eight weeks before her expected date of delivery in order to give her employer time to make proper arrangements for her absence. She must also state in the letter her intention to return to work following maternity leave.

She will also be issued an application form for maternity benefits by NIB, with sections to be filled out by her, her doctor and her employer. The form must be returned to NIB for processing.

“If the person wasn’t employed for the 12 consecutive months, they will get 14 weeks no-pay-leave for maternity purpose. The employer is not obligated under the law to pay them in this situation.”

In the cases of high-risk pregnancies, Lewis-James said once a medical doctor determines that the pregnancy is high-risk, a medical certificate for sick leave can be issued to the worker, recommending bed rest, for example.

“Now under certain sectors, workers are entitled to 14 working days sick leave. So, in the first instance, she will be entitled to that 14 working days with pay. Any other medical certificate for additional sick leave beyond that should be forwarded to the NIB and they will make the payments for sickness benefits accordingly.”

Lewis-James said if it is a case where the pregnant woman cannot work for the entire pregnancy, based on her doctor’s advice, she must submit her medical certificates to cover the period of her absence up to the time her maternity leave is supposed to start.

“In that case, she will have to proceed six weeks prior to her due date. The sick leave will end and the maternity leave will begin.”

And if the new mother is eligible for a promotion during the time she is on maternity leave, Lewis-James emphasised that she cannot be denied the opportunity.

“We encourage women to keep checking on NIS contributions to ensure they are being paid to the NIB to ensure that they qualify for NIS benefits. Although the payment of contributions is mandatory, sometimes there are breaches,” which will hinder access to the NIS benefits by employees. But in the case of maternity benefits, there is redress.

“If the employer wasn’t paying the NIS contributions, the employer is now required under the Maternity Protection Act to pay for the three months full pay during maternity leave.

At the end of their maternity leave, mothers are expected to return to work. However, in the event that she is not well enough to do so, or that the baby is ill, Lewis-James said the Act provides for that too.

“The Maternity Protection Act covers her for a maximum of an additional 12 weeks following the maternity leave. As soon as practicable she can submit a medical from her doctor that she or the baby is not well. The Act says for the first six weeks the employer must pay half pay. The next six weeks will be no pay,” she explained.

The legislation also covers cases that are non-medical.

“If you are not ill, but for some reason you cannot go back out to work immediately following the maternity leave. Say you can’t find a suitable baby sitter, for instance, the law allows you four extra weeks to stay home, but without pay. Ten days prior to coming back out to work at the end of your maternity leave you must write your employer to indicate that you will not be able to come back out just yet.”

Although twins may take up twice as much of a mother’s time, women who deliver twins get no extra maternity leave. She, will, however, get double the grant.

“Once the baby is born alive, the mother is entitled to the grant. And this is separate and apart from the salary issue,” Lewis-James said.

And as it regards having babies in quick succession, Lewis-James said there is a limit when it comes to the maternity leave with pay.

She said the labour inspectors are authorised by the minister to enter any public place and ask the employer to see records to ensure that the Maternity Protection Act is being complied with. “Employers are required to keep records for a period of five years in order to show compliance.”

The Ministry has embarked on a series of road shows to educate people on the rights of pregnant women in the workplace and the roles employers must play in ensuring these rights are not breached. Inspectors also visit maternity clinics across TT to raise awareness about maternity rights.

Lewis-James said currently there is no legislation that deals with paternity leave, but the ministry has commenced consultations to establish Employment Standards legislation which will look at improving terms and conditions for workers in TT. The proposed legislation includes provisions for family responsibility leave such as paternity leave.