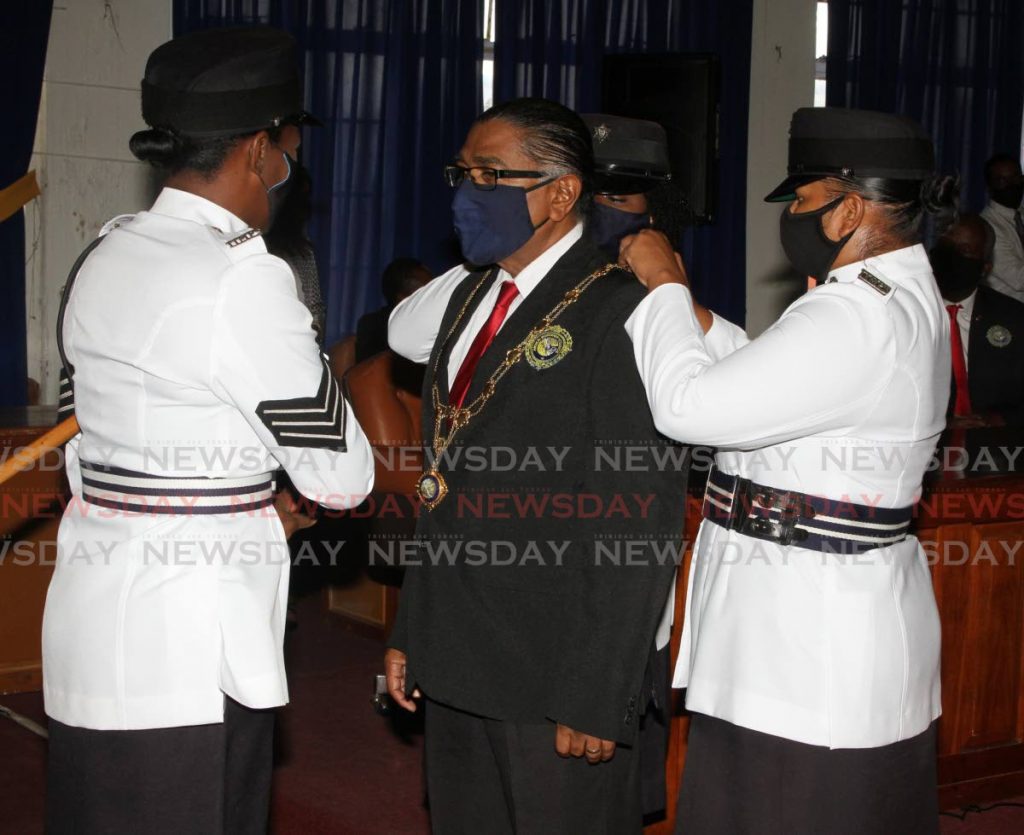 Newly sworn-in Arima Mayor Cagney Casimire is assuring the people of the borough that he will give of his best as he takes up the position. He was sworn in on Thursday at the Arima Borough Corporation.

Casimire, the former deputy mayor, was appointed as mayor under the Municipal Corporation Act following the resignation of former mayor Lisa Morris-Julian upon her election as D’Abadie/O’Meara in the August 10 general election.

He said the challenge of covid19 had shown the underbelly of the economy and people’s livelihoods.

“In Arima when we had shut down the country, there were people who had very little savings, who had to live hand-to-mouth. And the denying of the earning of those livelihoods meant that we had to help.

“So the challenge of covid19 is to change our economics. Not let consumerism run ahead of us to not let the dynamism of market forces move us away from what we need to do to service the people. We need to ensure that the livelihoods we encourage people to get into are sustainable.”

Casimire said there were three categories the council would be looking to assist through upcoming projects. The first was employment for people who had families to support. The second was the homeless, which would be helped by a project in conjunction with NGOs to provide support.

“It’s to bring them in twice a week to start with, for food and clothes, bath, shave, and if they have any mental and physical health issues, we have people there to take care of some of the mental health issues and to see what we could do in terms of counselling.

“We already have a database of all the homeless in Arima. And we hope when we open the Arima Community Centre, we can do it two days in Arima, you do it two days in Malabar, and that way we could touch all the less-fortunate people and give them help.”

The third is business-people and entrepreneurs, as he said the council would engage in local economic development by engaging an officer for local development.

“We will ensure the projects will allow the opportunity for our burgesses to earn a livelihood. We know there have been complaints about vending. I am looking at ways and opportunities for people to earn a livelihood through vending, that will benefit not only the vendors but the corporation.

“The council and I will identify ways through legislation to ensure those who need to vend can do so securely and with license and permission from the corporation. That doesn’t mean to say we encourage vending of all types, but we will need to regularise it in a way that is orderly.”

Casimire said projects for the modernisation and pedestrianisation of Arima would begin soon, as well as road and drainage works, as the old drainage system would be redesigned in a way that would benefit the people of Arima. He said two new malls would be built soon, and the council was looking forward to the building of the cultural and community centres.

He said, for the next two years, the council would be hampered by the need to raise finances, so revenue generation and value for money will become key to fund projects.

“Revenue generation doesn’t come at the expense of raising fees and taxes from the same people who do not have sustainable livelihoods. Revenue generation must take the form of partnerships, minimising costs and getting value for money.”

Casimire said collaboration and communication would be integral parts of the council’s approach going forward.

“I’ve already spoken to Arima MP Pennelope Beckles-Robinson and D’Abadie/O’Meara MP Lisa Morris-Julian, and every month we’re going to have a meeting with the councillors and them to review where we are and how we’re moving forward. It’s important that when you move forward, you don’t do so in disaggregated and diverse places, but with focus and the focus will be the people of Arima.”