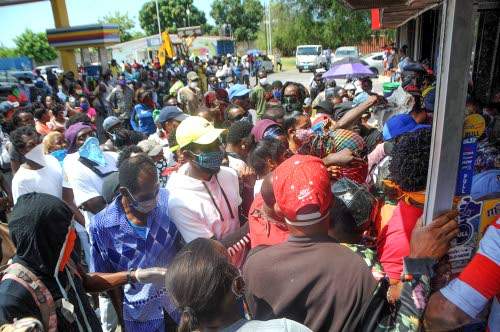 The Bank of Jamaica (BOJ) is projecting that the unemployment rate could climb as high as 12 per cent owing to COVID-19, which led to widespread layoffs in the Jamaican economy.

This is coming from 7.3 per cent, which was reported in January this year. Speaking at the BOJ’s quarterly news briefing on Wednesday, Deputy Governor Wayne Robinson projected the unemployment rate would be in the band of 9-12 per cent based on estimates from the Central Bank.

Robinson, who is in charge of Research & Economic Programming Division and Financial Stability, pointed out that the Planning Institute of Jamaica would have more details about the unemployment figures. In the meantime, the BOJ is projecting that the Jamaican economy will contract in the range 4-7 per cent for FY2020/21.

“Specifically, our forecast is a contraction of 5.1 per cent for this fiscal year. We are anticipating a recovery of 2.5-5.5 per cent in FY2021/22,” stated BOJ Governor Richard Byles, who also addressed the news briefing.

The projected contraction in FY2020/21 is broad-based but will be mainly reflected in Hotels & Restaurants, Mining, Wholesale & Retail, Transport, Storage & Communication and Other Services. He said other industries, such as Manufacturing and Distribution, which have been impacted by the measures instituted locally, will also see a decline. However, according to Governor Byles, “We expect that economic growth will resume by the first half of next fiscal year as ports reopen, travel and tourism-related activities gradually resume, and related services and production in the other sectors of the economy are revived.”

He posited that these drastic changes in the pattern of economic activity in Jamaica and abroad will be reflected in the balance of payments. The current account deficit of the balance of payments is projected to worsen by more than five percentage points of GDP in FY2020/21 to 7.5 per cent from the 2.3 per cent estimated for FY2019/20.

This worsening mainly reflects the impact of the sudden stop in tourist arrivals and the slowdown in remittance inflows. In contrast, the merchandise trade deficit is projected to improve due to a decline in imports, particularly fuel, in the context of lower oil prices.

The BOJ governor explained that “the fall in the income of Jamaicans as well as a decline in foreign direct investment-related projects are also expected to constrain the importation of non-fuel consumer goods, raw materials and capital goods”.

The assumed gradual recovery of economic activity, he indicated, implies that the current account deficit will also improve gradually over the ensuing two years.

The BOJ governor doesn’t expect a full recovery for the Jamaican economy until another year.

Notwithstanding the high degree of uncertainty around the duration of the COVID-19 crisis, over the next two years there is a stronger chance that inflation will be lower than the BOJ has forecast.

Governor Byles identified some of the factors that could cause inflation to be lower than anticipated, including even weaker domestic demand than expected because of a prolonged spread of the coronavirus in Jamaica and abroad.

“In this event, we would also see international commodity prices staying lower for longer than we currently envisage. There is also the possibility that the administered price increases for water and electricity that we assumed will not occur,” Byles told journalists.

The main factors that could cause inflation to be higher than expected, he said, include a faster pace of depreciation in the exchange rate as well as higher agriculture prices resulting from adverse weather conditions.

There is also a risk that the return to normalcy in the tourism sector could impact prices, particularly those related to agricultural produce.