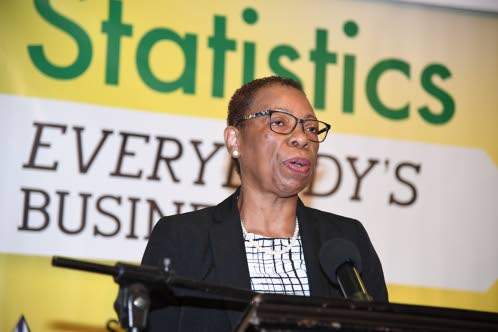 Director General of the Statistical Institute of Jamaica (STATIN), Carol Coy, is informing that the ‘clerks’ occupation group accounted for the most significant increase in employment recorded in the October 2019 Labour Force Survey.

Speaking during STATIN’s quarterly briefing at the Knutsford Court Hotel in New Kingston on Friday (January 17), Coy noted that the number of people employed in this group rose by 17,700 (19.3 per cent) to 109,400, relative to the corresponding period in October 2018. She said females accounted for the larger portion of the increase, totalling 11,200.

Coy then stated that an examination of the employed labour force by industry, relative to October 2018, showed that the largest increase of 10,800 workers was recorded in the category — ‘public administration and defence; compulsory social security’.

‘Public Administration & Defence; Compulsory Social Security’ accounted for the largest increase in male employment – 6,700. This spike propelled the figure from 31,100 to 37,800 people.

Coy then advised that decreases were recorded for ‘agriculture, hunting, forestry and fishing’, down 6,500 workers to 188,500, and ‘mining and quarrying’, which declined by 2,400 individuals.

Jamaica’s unemployment rate fell to a new record low of 7.2 per cent, according to STATIN’s survey.

A breakdown of the data shows that the total number of unemployed persons as at October 2019 stood at 96,700, representing a 16.4 per cent decline over the previous year.

Coy indicated that the out turn for females represented a 2.6 percentage points decline to 8.6 per cent, while the rate for the males dipped from 6.4 per cent to six per cent.