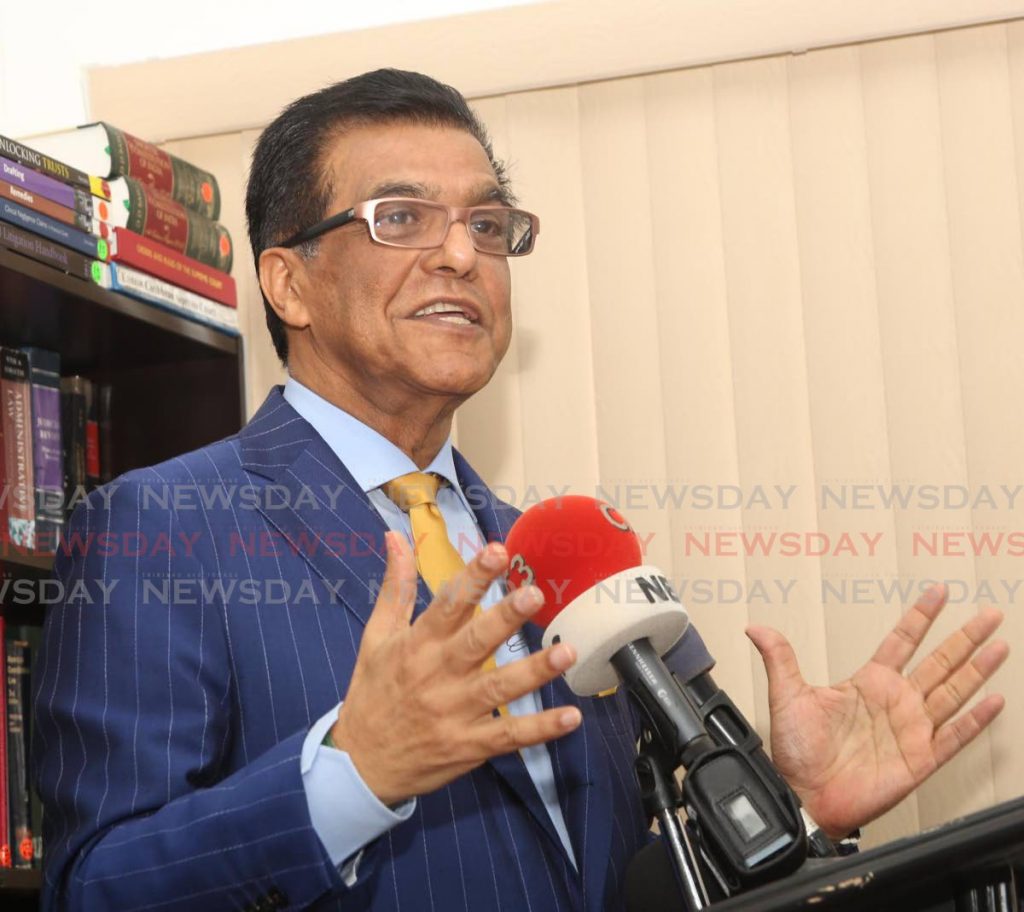 Maharaj: Workers can take action if unprotected from covid19

FORMER attorney general Ramesh Lawrence Maharaj SC called on Government and the private sector to ensure covid19 safety measures are in place at respective workplaces under their control before allowing workers to return to their jobs.

Maharaj said businesses that have not implemented those measures should not be reopened until they can. On some of the calls for the reopening of businesses that were coming from people aligned to political parties, Maharaj said, “We should put politics away from this.”

During a virtual news conference on Friday, Maharaj said Government and the private sector had a duty to ensure covid19 measures were implemented to protect their workers as they return to their jobs. He listed thermal screening of employees, workers displaying covid19 symptoms not being allowed into the workplace, proper physical and social distancing and the appropriate use of masks and hand sanitiser.

He said Government had the right to demand that businesses implement proper covid19 protection measures before reopening. With labour activities now listed as an essential service under the public health regulations, Maharaj said workers could refuse to work if they believed their employers had not taken steps to protect them from being infected by covid19.

He explained legal remedies could be sought by workers and trade unions through the Constitution, Occupational Health and Safety (OSH) Act and the common law, if they feel they are not protected from covid19 on the job.

While saying Government is doing “a good job” in terms of combating covid19 and a phased reopening of the economy, Maharaj suggested that Government re-assess the businesses which could be allowed to reopen during the six phases of its reopening strategy, announced on May 9 by the Prime Minister.

He said in other countries, businesses like hair salons were allowed to open after they put proper covid19 safety measures in place. Maharaj suggested that Government hold consultations with the private sector, trade unions and other stakeholders about these measures. He called for Government and the private sector to make their respective covid19 safety measures public.

Maharaj did not see the closure of businesses who could not implement covid19 measures as a foregone conclusion. He was certain that businesses could be assisted in implementing those measures which they may fall short in.

Maharaj said it is important to remember, during the pandemic, that “the human resource is more important than the financial resource.”

Told about some people aligned to the former PP government who were outside the Diplomatic Centre in St Ann’s on Thursday demanding the reopening of businesses, Maharaj said, “This is not a political issue.”