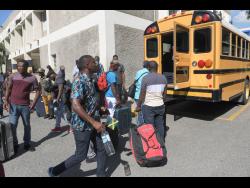 ‘They shouldn’t allow us to sign that waiver!’ – Jamaican farm workers in Ontario say Government should renegotiate for better pay, conditions

Some Jamaican farm workers in Ontario are having second thoughts about signing a waiver releasing both Jamaican and Canadian governments of responsibility, should they fall ill amid the COVID-19 pandemic, and are suggesting that Jamaica renegotiate a better package for farm workers, given the increased risks.

This, following recent reports that at least 17 Jamaicans are among 47 workers employed to Greenhill Produce in Kent Bridge, Ontario, Canada, who have contracted the coronavirus and have been placed in isolation.

Forty-five of the positive cases are migrant workers, and two are members of staff.

Speaking with The Gleaner on condition of anonymity, the farm workers expressed mixed reactions about being in the country on the Seasonal Agricultural Worker Program (SAWP).

Harlan, who has participated in the programme for close to 10 years, regrets that they signed a waiver before they left the island, although they were told the choice was theirs.

“They shouldn’t allow us to sign that waiver that they let us sign in Kingston, knowing the situation that we’re going to come up here and work without any form of benefit in case anything should occur,” he said.

According to the waiver, or Instrument of Release and Discharge document, the workers had to agree that they were responsible “for any cost, damages and/or loss that may occur or be incurred as a result of any exposure to said virus”.

Harlan said, while in Jamaica, they were told to take the necessary precautions to prevent the spread of COVID-19 when they got to Canada, and received similar instructions on the farms.

But explaining the labour ministry’s position when the groups left for overseas jobs earlier last month, Colette Roberts Risden, permanent secretary in the Ministry of Labour and Social Security, said, “The fact is, the employers wanted the workers and the workers were given a choice if they wanted to take up the offer at this time.”

She continued: “It is their job and they wanted to go. We don’t want to be in a position that we are preventing them from going and take up these opportunities of employment, but we outline to the worker the risk of going to work in those countries at this time. Some have decided to sit out this season, while others chose to go.”

According to the permanent secretary, the Instrument of Release and Discharge document that they signed outlines the risks involved in the decision taken by the workers.

“You cannot make a decision to go, despite knowing the risk, but expect that, if anything happens to you, someone else is responsible. We had to balance it,” she stated.

The men completed their 14-day quarantine recently and started working on the farms, but fear is high among the group that because of the pandemic, some of them may die. They want to be better paid and to receive benefits, irrespective “of the waiver that they forced us to sign in Jamaica,” Harlan said.

“We are our family’s breadwinner and, if anything should happen to the breadwinner of a family, we both know the outcome,” said Noah, a Jamaican farmer on his fourth year in the programme.

The men say Jamaica should negotiate with the Canadian government for better pay and work conditions for the farm workers.

Harlan says migrant workers do not get the same treatment as Canadian citizens where healthcare is concerned. “We are overlooked,” he said.

They expressed concern about the work of the Jamaica Liaison Service, noting that its officers would show up if someone is sick, but, if they need information, it is difficult to access these Jamaican representatives.

“Sometimes we even have concerns where we would want to even mention it to the liaison officer, but sometimes we all scared, because we a wonda if we might lose we job or sup’m, yuh know,” said Noah.